In our modern world of tight budgets and arts cuts, companies are having to come up with their own ways of generating funding for a show.

It might be a social media plea to every single person they know, it might be a flashmob stunt in a town centre, or it might just be offering to write your name on a post it note, stick it to an unwitting stranger’s back in public, and video the process.

That’s just one of the madcap rewards Mad Monkey Improv is offering as part of their crowdfunding project.

The hilarious comedy improv troupe – who got a 4* review on this blog in 2015  – is celebrating its third anniversary this year with a huge show at the Wilde Theatre at South Hill Park. Mission: Improvable will take place on Sunday, 25 September, and will include plenty of the bonkers challenges and skits the company has crafted over the last few years. 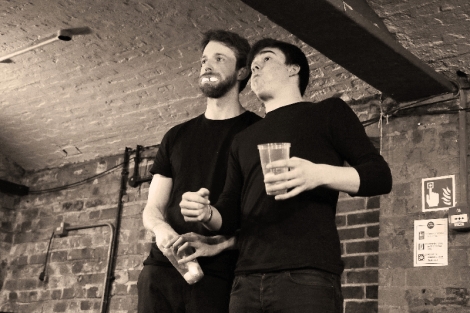 Up until now, they’ve been regulars at South Hill Park’s Cellar Bar, but to mark a momentous occasion, why not make a leap to the big stage?

But to do that, they need to raise a little more money to cover the venue cost, prop hire, marketing and wages. They’re crowdfunding over on Indie Gogo and offering a range of deals, from a £5 pledge which will get you a social media thank you, to £5,000 for the ‘ultimate corporate sponsor’ package which includes 50 tickets to the show plus loads of other things like having your company logo on the front of the show programme, a show at a private event, plus t-shirts and programmes.

Showcasing their cheeky side, the company is also offering a few random rewards, including the post-it note challenge, which is £50, (also including two tickets to the show, social media thanks and a programme mention), and ‘Screaming I Love You’ in a park – which is literally what it says on the tin (you get video proof of that too).

‘Will the stranger be mad?’ asks Mad Monkey on its Indie GoGo page. ‘Will we wind up in some sort of trouble? Probably, but we’ll be doing it for you because we love you’. Aw.

It’s great to see companies trying new and fun ways to generate support for their shows.  For £15, which is probably the price you’d pay at the box office anyway, you can get a ticket to the show, a social media thank you, and your name in the programme. It’s a fun way to offer a few little extras for those buying a ticket.

Mad Monkey Improv is also genuinely the funniest comedy improv group I’ve seen and I’m really chuffed we have a fun, silly, madcap group like them in Bracknell. They’re also performing at the Reading Fringe Festival this summer (yay!), so it will be worth checking them out there too.

And if you fancy hearing someone declare their undying love to you, at the top of their voice, in the middle of a park, then head over to Indie Gogo and join the bonkers world of Mad Monkey.

Mad Monkey contacted me about promoting their show, but this is not a sponsored post. I genuinely love their work, and want to help spread the word and support our local arts.

One response to “A night of hilarity with Mad Monkey Improv”

Welcome to my little corner of the internet. I'm a 20-something living in Reading, Berkshire, working in journalism and blogging in my spare time. Welcome to Broadsheet Boutique!

Error: Twitter did not respond. Please wait a few minutes and refresh this page.